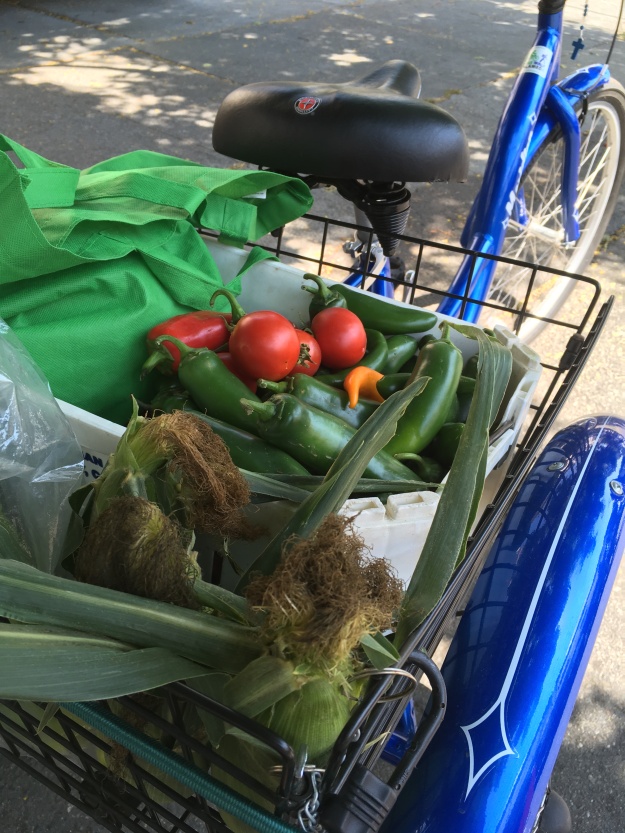 Unlike previous years, I only put up one small batch of tomatoes this year, but I did it in record time by using grated tomatoes. The lovely thing about this process is that it’s as simple as possible, but still makes for some mighty tasty results. I’ve written about canning tomatoes in previous years (see, for example, my post on October 14, 2013, “This, That, and Another Thing”), but this post captures the streamlined process I use now. As an added bonus, the process scales up or down nicely. Ready to play along at home? Alrighty then!

As I mentioned in this Wednesday’s post, ripe tomatoes go bad very quickly – especially farmers market tomatoes. That will happen with ripe things, nu? Plan your tomato canning day accordingly! You can usually hold ripe tomatoes for 24 hours, but doing so will result in some waste. It’s best to can the day you buy the tomatoes, but needs must, hmm? If you’re canning 40+ lbs of tomatoes, you’ll be facing a very long day. If your time or energy is limited, 14 lbs of raw tomatoes will make nine pints of canned tomatoes, which will be enough to make the effort worthwhile, but won’t take a full day to process. If you find even that amount of work daunting, then grate 5 lbs of tomatoes, simmer the resulting puree for 30 minutes, and pour into two or three pint jars. Just screw the lids on, let the jars cool on the counter, and then label and freeze those precious few jars. However much time you spend and whatever volume you process, trust me when I say that the taste of home-canned tomatoes is well worth the effort! 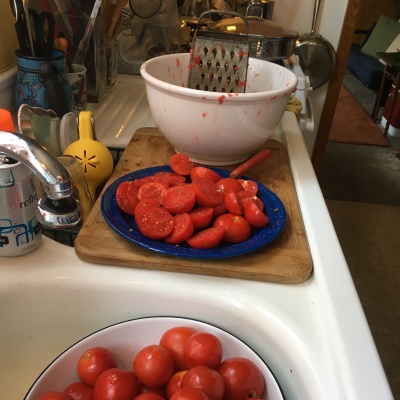 I follow the USDA’s recommendations on home canning as closely as I feel necessary. The USDA’s Complete Guide to Home Canning is available here, but I keep a printout in a binder in our kitchen. The USDA and I disagree on a few minor points, but in general I bow to its well-researched instructions. I HIGHLY recommend hot-packing tomatoes: you’ll have far fewer jars crack in the hot water-bath than if you cold-pack the jars.

Start your canning fun by sorting and washing your tomatoes carefully. Any mushy or rotten fruit should be discarded. Remove the green caps and stems, but there’s no need to core the tomatoes using the grated method. Cut the cleaned tomatoes in half, either horizontally or vertically, and grate them over a large bowl. Once the bowl is full, pour its contents into a tall pot (a stockpot if you have one) and put the heat on low. Keep grating tomatoes until there are none left, adding to the pot as necessary. Once all of the tomatoes have been added to the pot, boil gently for 5 or 10 minutes.

Because I abhor waste and love tomato juice, I urge you to use those “empty” tomato skins instead of composting them. As mentioned in the last post, tomato skins produce a very nice juice when cooked down. It’s an easy process to have running at the same time you’re cooking the pulp: when the skins pile up, add them to a small pot with tall sides and let them simmer. As noted before, it’s unnecessary to add liquid: the skins will produce a surprising amount of juice as they cook. The juice will be ready to process or enjoy fresh at the same time as the pulp.

Please note: a full water-bath canner will take AGES to come to a boil, so start that first, before you even wash the tomatoes, if you have any sense. I forget to do this almost every time. Pro tip: I sterilize my jars in the water-bath as it’s heating up. The jars and the rings needn’t be new, but you MUST use new lids, which should be washed and put in a bowl of hot water to cover, along with the rings. Five minutes after the water-bath comes to a hard boil, carefully remove the jars from the water with a jar lifter (specialized tongs that come with your canner) to a folded towel on a cutting board. By sterilizing the jars thusly, I know how full the water-bath needs to be in order to safely process acidic food: the USDA recommends that jars in a water-bath canner be covered by 1 to 2 inches of hot water. As you’re removing the now-sterilized jars, pour a little of each jar’s hot water back into the water-bath, to account for the water that will have been lost to steam and what-have-you. Jars thusly sterilized can safely sit on the counter for a good ten minutes before being filled with hot tomatoes; if you won’t be ready in ten minutes just keep the jars in the canner’s boiling hot water and curse your luck.

Remember that the larger the volume of tomatoes, the longer it will take to prep and bring them to a boil. I don’t bother straining out the tomato seeds myself, but you can if it makes you happy. The USDA feels very strongly about adding bottled lemon juice or citric acid to each jar to insure sufficient acidification, but I don’t bother – the tomatoes I use are acidic enough without that step. However, I did follow their recommendation the year I canned dry-farmed Early Girls from Happy Boy Farms that were complete sugar bombs. If you’re new to canning, you’ll prob’ly feel more comfortable following the USDA’s instructions to the letter, hmm yes?

As I fill the hot jars with tomatoes, I add a little sea salt to each jar, in approx’ly the amount suggested by the USDA. I very much follow their guidelines once the jars are filled and ready to process. I find the act of transferring the filled jars to the hot water absolutely nerve-wracking: the memory of previous years’ cold-packed jars cracking randomly as they were placed into the hot water of the canner still haunts me, and will for an eternity.

However, the trouble and bother of the foregoing is all very worth it when the jars are safely out of the canner, sitting prettily in neat rows on their towel-covered cutting board. How I love hearing the ping! sound the lids make as they seal! And the feeling I get when I reach for a jar of summer-filled delight in the depth of winter could best be described as sense of smug, well-deserved satisfaction. True thing: canning tomatoes is a pain in the rear, but it is sooooo worth the effort.

And on THAT happy note, that’s it for this week’s glut of end-of-season posts. I haven’t the foggiest notion of what next week’s post will be, but it might involve eggplants.  Then again, it might be a report on recent sewing and knitting projects. I don’t know, but I do know it’ll be lovely to tell you all about it.  Until then and very fondly, your little munakins 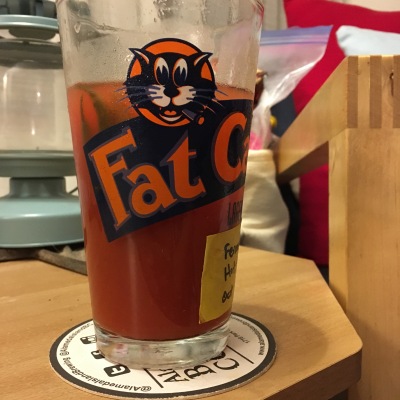 I had two – just TWO – Bloody Marys this summer, as the weather in the inner Bay Area was too cold to enjoy ‘em for much of the season. The weather’s grand again, though, so there’s hope that I can make up for lost time…