As reported earlier this summer, eggplant pickles are easy to make and taste like olives when they’re done. They’re marvelous, really. My eggplant pickles are based very loosely on a recipe in a wonderful cookbook called My Calabria, by Rosetta Costantino. Her recipe for pickled eggplant preserved in oil, Melanzane Sott’Olio, is given in the Calabrian pantry chapter, which is a chapter I practically have memorized. In fact, I have either made or have plans to make every recipe in the chapter, and how often can you say that? Costantino’s recipe for pickled eggplant calls for simmering eggplant slices in red wine vinegar. Now, perhaps you do the same thing whenever you read about things preserved in vinegar? If you immediately think, “I bet I could ferment that”, you are definitely a member of my tribe. That’s what I thought and so that’s what I did. 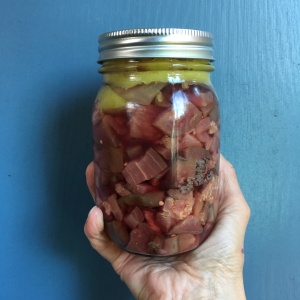 Mind you, I’ve only made these pickles for three seasons or so, and even then only one batch per season. Disclaimer: my version is still a bit of a work-in-progress. Below are some instructions for my method of prepping the eggplants for fermentation, and instructions on putting the pickles in jars for long-term storage. For specifics, please refer to page 281 of Costantino’s cookbook. Mind you, you don’t need her recipe to make eggplant pickles, as they’re easily made using basic fermentation skills. The balance of flavors in her recipe is a thing of beauty, though…

To make your own fermented eggplant pickles, choose small small, ripe, firm eggplants. Large eggplants make excellent eating but lousy pickles. Wash the eggplants and remove their leathery caps and stems. Don’t pare the skin off – you’ll be using the slices of skin later in the process. Slice the eggplants, using a mandoline and watching yr fingers! Set the blades to 3 mm, and slice horizontally or vertically. You can also use a knife, but using a mandoline is far quicker. Vertically or horizontally: it doesn’t matter how you slice ‘em – I mixed-and-matched my slices this year. Also, don’t bother trying to keep the sliced flesh white. It just ain’t worth the bother, in this or any other preparation, peeps. Sort your slices into two piles: one for mostly flesh slices, and another for mostly skin slices.

As you can see, you’ll have a lot of scraps after slicing the eggplants. Instead of composting those scraps, fry them up in olive oil as a well-deserved lunch or snack. To learn how I do that, tune in later this week for my newest favorite way to cook eggplant scraps. Whether you cook up the scraps or toss them, SAVE a good number of large slices of skin to use as fermentation followers. You’ll thank me for that tip later.

Back to our piles of nicely sliced eggplants. Now it’s time to weigh ‘em to calculate how much salt we’ll need to use. I dry-salted this batch, as I have previously. If you dry salt you’ll need 2% of salt by weight; if you brine, you’ll need a 5% brine. If you have any questions about this, refer to this summer’s multitude of jalapeno fermentation posts, or to whatever fermentation manuals you have on hand – that would be Katz’s The Art of Fermentation and the Shockeys’ Fermented Vegetables in the Houseproud kitchen. Once you’ve calculated the salting ratio, cut the slices into uniform cubes. Don’t go crazy if the cubes aren’t identical, as it doesn’t make a bit of difference if they are. Once they’re cubed, add salt to the eggplant in batches, squeezing gently between additions. I salted my cubes in a giant bowl and transferred them and their liquid to the fermentation jar when I was done salting. I topped the fermentation crock with a follower of overlapping eggplant skin slices, placed a water-filled glass jar on top of that, and draped a towel uber alles. Aren’t you glad you saved those slices of eggplant skin now? I certainly was … 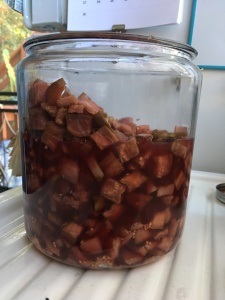 After six days of vigorous active fermentation, the eggplant cubes were perfect: the flesh had a pleasantly sour taste, with just the faintest hint of bitterness. NB: That bitterness will fade away entirely in time, but more on that later. In preparation for long-time storage, I stuffed the eggplant cubes into pint jars with one or two wild fennel seed heads. After tamping down each jar, I added an eggplant skin or two as followers, and then topped each jar with an inch of very nice olive oil. Using the oil negated the need for a wax paper lid protector. As always, remember the Shockeys’ mantra: “Submerge in brine and all will be fine.” In this case, the pickles were submerged in brine and THEN topped with olive oil.

Some thoughts for next season: I really would like to try Costantino’s recipe as written next year. Also, I’d like to make at least two or three fermented batches, using different types of eggplant. This year’s batch, which used small globe eggplants from the Garcia Farms, has already mellowed, but last year’s eggplants took MONTHS to lose their tannic bitterness. I think last year’s eggplants were small Thai eggplants, but I dunno. In addition, next year I will feel confident enough about my variation to offer the pickles as gifts to thems that like such things.

And so with pleasant thoughts of summers to come, I’ll end this end-of-season report on fermenting eggplants. I hope it inspires you to make your own eggplant pickles – either using basic fermentation techniques or Costantino’s My Calabria recipe. Tune in later this week for a mini post that will give a recipe (of sorts) for fried eggplant scraps, and another about pickling green tomatoes. Until next time and very fondly, yr little munakins 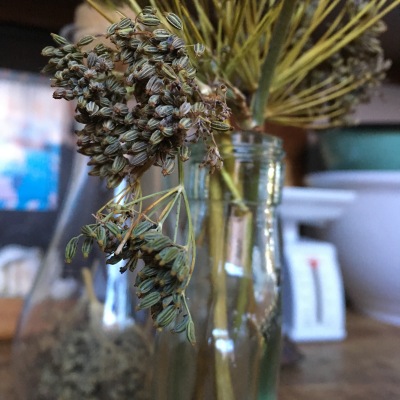 I’ve foraged wild fennel seeds along Alameda’s shoreline this summer and in previous years, inspired by Rosetta Costantino’s My Calabria. The seeds taste like summer to me, and I use them in a number of pickles.