The cozy-covered tv in a corner of the Houseproud homestead’s living room has new decorations up.  Extra credit if you can spot the good-luck chimney sweep!

Wasn’t that refreshing?  While we’re looking around, let’s take a look at the folding screen in another corner of the Houseproud homestead’s living room:

It wasn’t until I put the screen together that I noticed that the “i” in the Mister’s name & the “u” in my name were connected by a heart to spell out “i (heart) u”. Ain’t that something? Yes, yes, yes, I know, I need a life …

The screen is filled with letters that vertically spell out the first names of the Mister and me, separated by a column of hearts.  The letters and hearts were cut from scrap red paper that I had in my stash, and the background is ANCIENT calligraphy paper that I’ve had since I was about a foot shorter than I am now and a heck of a lot younger.

The wreath is back up, as you can see. (I still think the flowers needs stamens, don’t you?)

We don’t celebrate Valentine’s day ’round here (we exchange cards to mark the day, but that’s about it), so normally I don’t put up much in the way of Valentine decorations.  However, mum-of-mine gave us some old decorations that she’s horded from my childhood, and that inspired me to put something up for Valentine’s day this year.  As it is the Houseproud homestead’s policy that either things get used or they get thrown away, and as neither mum-of-mine nor I could IMAGINE throwing anything sentimental away, I put up some of the sweet decorations.  I’m glad I did.

And that’s my intro to the first tip from the Houseproud homestead:  “either things get used or they get thrown away“.  These are words live by, my pets!  There will be more on this in subsequent posts, but I’m gonna keep it tres simple this time around.  Your little munakins tells you to put up those decorations, cut into that beautiful fabric, drink that fine bottle of wine, eat those chocolates already, or bloody well give those things away to someone who will.  Have I convinced you of the wisdom of this?  I certainly need to convince myself – I am having such trouble parting with a few things that I will never use …

Anyway, on to Houseproud homestead tip number two:  have you ever returned home from a shopping excursion to find that the vegetables you just purchased look limp and a little worse for wear?  Have you ever pulled a vegetable from your fridge that showed the same signs of decrepitude?  When next you need to revive vegetables that have wilted, try this trick: place the limp produce into a sink and fill the basin with ice-cold water.  Let the vegetables soak for at least 30 minutes – longer, if necessary.  As they soak, pick through and remove any bits that are wilted or rotten.  The soaking vegetables will regain some of their lost moisture and will revive.  (Loss of moisture is the cause of the wilting, you know.)  Most wilted produce can be revived by a cold bath, and that’s what I will do to refresh these carrots, which have become a bit limp at the tips.  (As an aside, let me point out that you could be a responsible homemaker and use that soaking water in your garden or on your houseplants.) 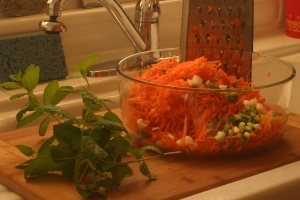 (Second aside:  I’m using those carrots to make a shredded carrot salad, the making of which I’ve described in a previous post – the recipe is tip number three, half way down the page.  Here’s a picture from that post to tempt you to make the salad.  As a yet further aside, I was asking questions of Google the other day, and learned that the French are mad for shredded carrot salads, which they call salade de carrottes rapees – or so says David Lebovitz.  Go figure.)

(Heavens, yet another aside!  Seriously, though:  once you’ve revived that produce, why not try tip number four in the same post that has the carrot salad recipe:  loosely wrap your produce in light cotton towels, before placing into plastic bags and tucking away in the fridge.  The photo is from that same post.  This tip works very well with produce that’s susceptible to wilting.)

Cut flowers in vases on the Houseproud kitchen’s sink counter, waiting to be swabbed out and down. Extra bonus points if you spot the jar of refrigerator pickles sitting on the window ledge behind the flowers (yellow beets, if you want to know – they need a few more days to cure in the fridge, so I’ll let you know how they turned out when next I post).

Moving on, moving up, moving along to the next Houseproud homestead tip:  cut flowers need fresh water.  Cut flowers last much longer when you replace the water in the vase every day (or at least every other day).  As you change the water in the vases, check the flowers for stems that are slimy and discard those stems before they eat away at the others. Flowers last even longer if you wash the vase out before replacing the flowers, and yet longer if you rinse the stems of said flowers in warm or hot water before plunking ’em back in their newly cleaned vases full of fresh water.  We are lucky here in Alameda to have good sweet water which doesn’t smell too highly of chlorine, so I use water right out of the tap.  Others of you might not be so fortunate in your water suppliers, and might want to use filtered water for cut flowers.  Those of you who get their water from an ice-cold spring on a farm at the top of a beautiful road in a lovely corner of Montana need not worry about such things at all.  (Instead of worrying about the quality of their water supply, those particular folks worry about softball-sized hail and wickedly smart mules and driving on goose-snot-slick gravel roads and other country living things.  The Mister and I would like to exchange our urban worries for those country concerns, except for the goose-snot-slick gravel roads, which are NO FUN AT ALL to drive – up or down – oh my, no.)

And that’s it for today’s tips and digressions from the Houseproud homestead.  We’re done here for this week, but I have a bunch of projects in the hopper, some of which I hope to share in my next post.  Until then, take care my pets!