Hello, hello and hello again, my pets. Just popping in to let you know that I have been thinking about you this week, although there’s been little here to prove that. I would have stopped by earlier, but I’ve been stricken with a severe attack of lack-of-focus-itus, which has resulted in a large number of half-started sewing and knitting projects, and a general inability to get anything of substance done. This lack of focus, coupled with the way I generally feel these days after hearing the news, has made me uncharacteristically out-of-sorts. On the off chance that you occasionally suffer from the blahs yourselves, here are a few sure-fire methods to revive your sense of hope and purpose, all of which I’ve employed recently: go for a walk; do the hokey pokey*; fuss about in the garden; and make jars and jars of peach sorta-jam.

You see, as mopish as I’ve been of late, there has been quite a bit of cooking going on. For example, did you know that you can make conventionally grown peaches taste heavenly? It takes a few steps, but the results are well worth it. Here are some basic instructions for what I call peach sorta-jam. Try it and tell me what you think! 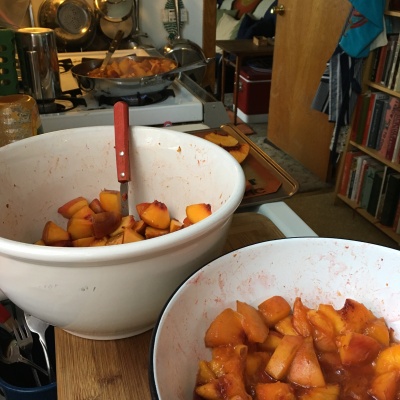 Take an assortment of conventionally-grown peaches in various stages of ripeness, wash well with soap to remove traces of chemicals, cut in half, remove pits, and trim any badly bruised or moldy spots. Place halves cut-side-up on trays or silicone mats in a warm oven, turn off the oven and let the peaches rest overnight. The Houseproud kitchen’s oven is always slightly warm, thanks to a wonky pilot light, but sometimes I’ll preheat it to a very low temperature – 140 degrees Fahrenheit – and then turn the oven off. The oven slowly cools down over the course of a few hours, creating a gently warm and dry environment. Your ovens will vary, I’m sure, but by lightly dehydrating the peaches, their concentrated flavor become closer to what an heirloom peach tastes like. This trick works wonders with less-than-great tomatoes, too. 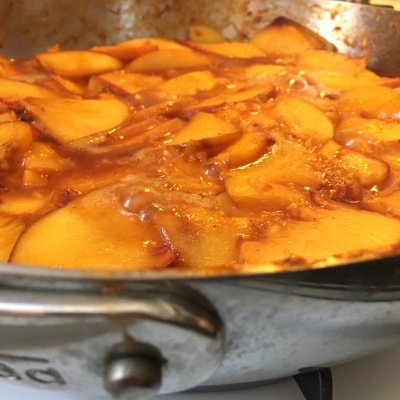 The next day, cut the peaches into reasonably equal pieces. Adding a small amount of honey to the peaches helps deepen their flavor, too. And by small, I mean small: about two or three tablespoons were enough for 15 lbs of peaches. Don’t bother skinning the peaches – the skins add a little more flavor and soften when the peaches are cooked down. I recommend slicing the peaches with a mandoline set to 3mm (not too thin, not too thick), but roughly cutting them into chunks worked fine, too. Toss the pieces in a large bowl with the honey. Add the peaches to a skillet set over a medium flame, stopping when the skillet is full to the brim. Adjust the heat as necessary and simmer the peaches until they reduce and their juices thicken, about 30 minutes, stirring more frequently towards the end. Don’t add any liquid – the peaches will release sufficient juice as they cook down. You might have to work in batches: if you do, just cool the last batch as the new batch cooks, and then combine the batches together at the end.

The resulting faux jam, which filled two quart jars and five pint jars, tasted heavenly. The peaches had been transfigured from tasting bland and watery to something rich and deeply peachy. If I’m ever gifted with more peaches like this, I will take the time to preserve them in a water bath canner. Unprocessed, these jars will last a few weeks in the fridge, which is plenty long enough. I put one jar in the freezer to enjoy later this year, and set aside a few small jars to share with friends and family. Honestly, though, I suspect that most of this will be going into my belly…

And on that rather self-indulgent note, I bid you adieu for this week, my pets. Be well, take care, have hope: winter is coming but it ain’t here yet! Until next time and very fondly, yr little munakins

*Trust me: it is IMPOSSIBLE to feel cranky and out of sorts whilst doing the hokey pokey. Doing it is sweet and silly; slightly odd and completely joyful.