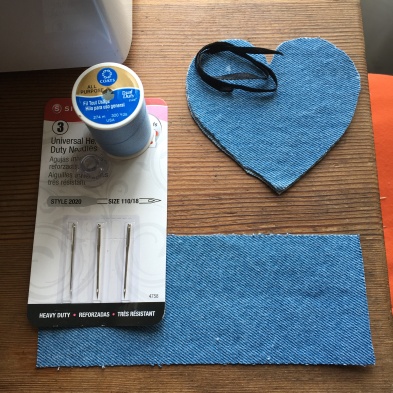 This is not a picture of jalapenos.

I’ll have you know that some of my most effective puzzling through a project has been accomplished whilst running at the gym. There’s nothing like a grueling pace to help one focus on the proposed steps of a project – and if nothing else, thinking through a project is a welcome distraction. But as helpful as this process can be, usually the actual making of a new thing can be tricky: materials or ingredients can behave unexpectedly. Therefore and thusly, when working on something new, test runs (heh) are a good thing. As a case in point, I’m making a zippered tote bag from mid-weight denim for the first time, and I’m slightly unnerved by the heft of the material. So I decided to start by making a matching heart charm and a key fob, to learn how the material handles before I take on the bag itself. While these two test runs should be a fun way to learn how to sew heavier denim, I am very sure that installing the bag’s zipper will bring me to tears. However, more on that in another post – this ‘un is all about salting and fermenting jalapenos.

Besides other things, test runs can confirm or debunk widely accepted truths. For example, I’d read for YEARS that the green bits of sprouted garlic are bitter and must be removed. Then I read an experienced chef who said that’s silly. Okay, said me: I tried the sprouts and didn’t noticed any bitterness at all.* Similarly, I’d heard that chile ribs and seeds ought to be removed, but wondered why. I went to my kitchen library, and taking the consensus of my more modern cookbooks, learned that chile ribs contain the bulk of their heat and that their seeds can sometimes be bitter. As hollowing chiles can be both time-consuming AND perilous, last week I decided to make a test run of jalapenos fermented with their seeds and ribs. I was confident that all would go well, having previously made jalapeno salt with ribs and seeds, and found that very tasty. Happily, I can now report that fermented seeds-and-ribs jalapenos are also very good. They have the deep umami taste of fermented chiles, and they certainly aren’t bitter.** Make some dry-salted and self-brined fermented jalapenos, and taste how yummy they are yourself! 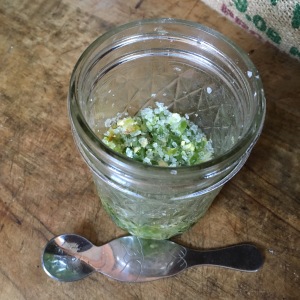 To make dry-salted jalapenos, simply mix roughly chopped peppers with an almost equal amount of coarse sea salt. As when making a fresh herb salt, leave the jar open to encourage evaporation. I haven’t covered either the herb or the chile salts in cloth or mesh while curing, which I always do for ferments or vinegars (the latter two draw flies otherwise). With juicy fresh chiles, a small amount of brine may develop at the bottom of jar, but most of the salt crystals should still be visible. The jalapeno-salt mix quickly becomes delightfully hot and salty, and I’ve both cooked with it and used it “raw” to equally good effect. I add it whenever I want to add a bright chile heat and flavor to a dish, which is pretty much always this time of year.

Fermenting chiles in their own brine

The test batch of fermented jalapenos took a little longer to prep, but only because it was a larger volume than the salted jalapenos. It definitely took far less time than in the past when I’ve carefully removed the chile guts, and using a mandoline slicer made the process faster yet – albeit a little fraught with danger. I sliced the chiles on a slight diagonal, holding them by the stems and keeping my fingers well away from the blades. I weighed the resulting slices (2 lbs), added 2% salt (0.64 oz), and mashed the mix together with a pestle. Brine immediately developed, helped along by the occasional pestle thump every few hours. Started in a small crock, the ferment was transferred into glass jars the following day, which is my current preferred fermentation method.*** Just make sure the crock and jars have plenty of room for whatever you’re fermenting, or brine might spill out and be wasted. As it’s usually rather cool in the Houseproud kitchen, I didn’t worry about keeping the slices under brine for the first 12 – 24 hours. Within a day the jalapenos had wilted dramatically, and a good amount of brine had been produced.

At this point, I transferred the much-reduced jalapeno slices and their brine into glass jars, which allowed me to better monitor the countertop fermentation process. In order to keep the chile slices submerged in brine, which you MUST do once fermentation starts, you’ll need a “follower” to weigh down the floaties.**** I used a Ferment’n ceramic weight for the quart jar, and a precariously balanced aperitif glass for the smaller jar. Both jars were initially screened to keep flies at bay, and each sat upon appropriately-sized plastic lids, to be used as catch-basins if the brine overflowed. Vigorously active fermentation over, the jars are now covered by airtight lids. They will live on our kitchen counter for at least a few more days, at which point the ferment will get strained, bottled, and tucked into the fridge. I’ll report back on that process in another post, when the deed has been done.

That’s it for this week, my pets. We may chat about sewing next week, if all goes well with the denim tote, or about bottling hot sauce, or about using leaves as mulch in yr garden. Who knows? Isn’t it lovely to have choices? Oh, my yes, it is.

Until next time and very fondly, yr little munakins

*Mind you, dried-out sprouted garlic should be composted: it’s good for naught else. Some greening of the sprout, though? Just mince the sprout with the clove and call it a day.

**Both personal experience and research have shown that fermentation reduces the heat of chiles, at least initially, which is all the more reason to include ribs when fermenting hot sauce.

***When I’m bulk fermenting, I use a large 2 gallon ceramic crock and keep the ferment going in that until it’s time to jar it up for long-time storage. This means I only need one follower, instead of many…

****Keep in mind: seeds or other bits floating above the brine can lead to mold growth. Check yr ferment regularly when it’s on the counter and occasionally when it’s in the fridge. No worries otherwise, as long as everything is under the brine.