We were very merry at the Houseproud homestead this Christmas and New Year, but all good things must come to an end, yes? The Christmas decos came down on Saturday and the new year / good luck decos were given pride-of-place instead. And with the excitement of the holidays over, there’s backlog of projects to which I must attend – some of which you might find interesting, but many of which you would not. I’ll share the more interesting projects with you anon, but here are a few Christmas me-mades to hold you over until then. I really must say, I made some cool stuff this Christmas.

My favorite project was a pig stuffie made from upcycled fabric, closely followed by a wool felt coffee-press cozy in the shape of a bluebird. And among other things, I made a speech bubble stuffie from blackboard fabric that wins the prize for “best use of something that’s languished my stash for 20+ YEARS”. I used my sewing machine to sew vinyl, peeps! How magic is THAT? And almost every Christmas gift that I made involved using my sewing machine to overcast edges or seams. I even used the machine to stabilize the edges of a knit fabric by employing an elastic stitch setting. I am SUCH the boss of my sewing machine now.

This pig stuffie just slays me, my dears. The pattern is from Martha Stewart’s Encyclopedia of Sewing and Fabric Crafts*, and it was ever so easy to make. Well, I did get dreadfully confused about how to fold and sew the underbelly’s legs to make the stuffie stand up, but I figured it out in due time. Also, I’m not best pleased by the way in which I handstitched the turning gap closed, but gracious, the stuffie still looks sweet.** The pig’s sweetness factor is upped by the fact that it’s made from scraps of a thrifted sweater that I dyed with Kool-Aid in MT ages ago and pieces of an old suit of the Mister’s. My happy discovery was that the suit scraps that were permanently fused with interfacing proved to be PERFECT for small stuffed objects like this. More on that the next time I make a suit-scrap stuffie, but I can report that the making of this little piggy did (minutely) reduce my stash of scrap material…

And on the subject of stashes: I am pleased with the way my self-drafted speech bubble blackboard fabric stuffie turned out. Even better, the process of making it ate through some of the blackboard fabric that I’ve had in my stash for just about FOREVER. Ain’t working with blackboard material a pain in the rear, though? My first two attempts were very frustrating, as I fought the nature of the stiff fabric by sewing the two sides wrong-side out, and then had to force the piece right-side out through a small turning gap. The turning process lead me to speak some very bad words. My next few tries were successful because I followed what the fabric was happier doing by top-stitching the two sides together right-sides out with a small gap, through which I added the stuffing. Once the stuffie was lightly stuffed, I carefully machine-stitched the gap shut.*** I gotta say that as frustrating as this project was at times, my “speak out” stuffie is an awful lot of fun to have around to use as a photo prop or deco …

And speaking of fun, I am SO FLIPPIN’ happy with the way in which this little joy turned out. It’s a bird-shaped coffee-press cozy made using a self-drafted pattern from thick blue wool felt from my stash.**** After a bit of tinkering, I came up with a design that would fit over the small coffee press that Mother of Mine uses. I had such fun designing and making this – even the fussy bits like the hand-embroidered beak and wing details on both sides of the cozy. I have plenty of process pics from this project, which I promise to share with you sooner or later. A cozy like this is a great gift for anyone who brews their own coffee or tea, someone who, like my mum and me, doesn’t crank the heat up in their home when the weather outside turns nippy. In winters past, I’ve wrapped a tea towel around my coffee press to keep it warm while it brewed, before the Mister bought me an insulated coffee press last year. Drinking truly hot coffee on a cold morning is pure bliss, yes? 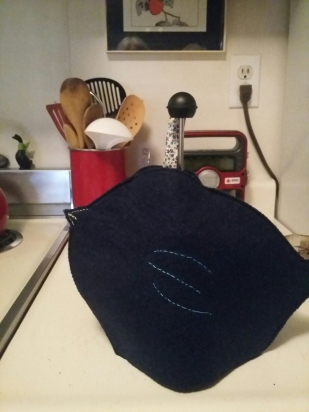 Here is the cozy in its new home in my mum’s kitchen. I call it the bluebird of happiness cozy, of course. Here’s hoping that the bluebird of happiness has visited you this first week of the new year, and that if it hasn’t – and lord knows, it’s been a rough three weeks for some folks in this country – here’s hoping that you have a little something to look at that makes you happy, something made for you or by you or given to you with love and affection. That’s it for this post. I’m not quite sure what or when my next post will be: it might describe one or two of my favorite new ferments, or my newest mania for knitting hats, or to humble-brag about FINALLY finishing that dratted knitted tunic … but until then and very fondly, yr little munakins.

The Mister and I spent New Year’s Eve safely at home binge-watching an AMC series called The Terror. I highly recommend spending New Year’s Eve catching up with a series, my pets, although you might want to go to bed before 2 am if you want to function well on New Year’s Day. After we finished watching the series the next night, the Mister created a new cocktail that he named in honor of the show: The Terror cocktail. It’s really an Aviation cocktail with the addition of a maraschino cherry. The regular Aviation has a lovely icy glacier-blue color already, and the added cherry slowly sinks to the bottom of the glass in an appropriately gruesome manner. Good times in the Houseproud homestead!

** Future pattern hack for stuffies: either make the underbelly in two pieces and place the turning-gap down there, or simply move the turning-gap to whichever bit of the beast has the most nap (which should help disguise the hand-sewn seam).

*** If I make more of these speech bubble stuffies – and I might, just to prove that I can – I will use more stuffing than I did the first time around. Also, I learned a valuable lesson on the importance of storing fabric like this in a roll, not folded. Um, duh??? Luckily, most of the creases came out after being gently pressed with an iron from the wrong side, and it’s now stored safely in a roll.

**** I am mildly annoyed that I can’t remember the source of this lovely wool felt. Was it a remnant from Stonemountain and Daughter or from Britex? Perhaps I scored it at the White Elephant Sale or St. V de P Thrift? Who knows now …