Still life with the last jars of hot sauce and canned tomatoes, along with jars of assorted other preserved goodness.

My pets, is it summer where you are yet?  It is in our neck of the woods, and about a month ago our local Farmers’ Market started its slow climb into full veggie glut.  As the stone fruit rolls in and the offerings of summer squash explodes, I’ve been watching carefully for my true summer bellwethers: hot peppers and dry-farmed tomatoes.  Even in my busiest years, I’ve always managed to put up at least a few jars apiece of those two treasures.  And in all the years that I’ve preserved food, there’s always been a gap between finishing the last jar of anything and the beginning of that thing’s growing season.  I am very zen about finishing the last jars of most Houseproud home preserves, but I kinda loose my mind when I finish the last of the hot sauce.  This is completely understandable, cuz that stuff is amazing.

Amazing, yes, and made from simple ingredients, but not quick to restock.  You see, while some fermented things – and most canned things – make for instant gratification, fermented hot sauce does not.   First, you must wait until the peppers have matured into their super hot stage, which for us is usually early- to mid-September.  Then you have to carve out a few hours to prep pounds and pounds of mixed peppers.  [Note to self: make sure you have new gloves this year, munakins, as gloves with holes offer inadequate protection against the chemical burn that pepper juice can give fingers.]  The peppers go into a crock with a proportion of salt-by-weight, followed by a week or so of monitoring:  Is there enough brine? Is the weather too hot?  Too cool and foggy? Is there too much salt, or not enough?  And so on and so forth.  Once the first stage of fermentation is over, the pepper pieces and their brine get put into quart jars, which then are placed at the back of the fridge for a few months to further cure.  At the end of that period, the length of which varies depending on the peppers and the fridge and prob’ly sunspots, the peppers get pureed and their skins discarded.  From a huge pile of peppers and some salt you get two small jam jars of hot sauce.  It is SO worth it, though.  If you care to know, my process of making hot sauce is based on a few years of experimenting after studying fermentation guides, the best of which is Sandor Katz’s “The Art of Fermentation”.  Like many of the things that I make, making hot sauce isn’t difficult:  it just takes time.

Needless to say, the high season for tomatoes, and therefore for Bloody Marys, does not mesh well with the completed hot sauce season.  Oh, of course one can adorn a Bloody Mary with fresh or pickled hot peppers, or with first-stage fermented hot peppers, or purchased hot sauce (hrmph), but heretofore none of the previous year’s hot sauce has lasted long enough to be used in this year’s drinks.  Happily, there’s a distinct possibility that there might be enough hot sauce this year, but if there isn’t, that’s okay – it certainly won’t keep your little munakins from making mighty fine Bloody Marys during the season and enjoying them greatly.  This year I may experiment with adding salt-cured limes to a Bloody Mary, as well as a wee bit of fermented garlic brine.  I mention this in passing because what I ferment and preserve dictates my ingredient list for Bloody Marys.  In fact, it’s clear that my love of fermenting veggies and canning tomatoes has led to a proportional love of homemade Bloody Marys.  Amusingly enough, this is not the first time I’ve waxed poetic about Bloody Marys and canning / fermentation on this blog.  If reading about such things pleases you, direct your attention to the post from late October 2013 called, “That’s Kinda Cool, Innit?”.

But it’s not all about Bloody Marys in the Houseproud kitchen during this time of year.  Oh my no – there are all sorts of things to preserve, and not all of them would go well in a drink.  So as the high season for preserving approaches, I’ve been pondering what to can and ferment this year.  Shall we compare lists?  Here’s what I have planned:

In preparation for this glut of preserving, I’ve identified last year’s ferments in the fridge, a task slightly complicated by my unwillingness to label things clearly.  The fridge is stuffed already, but I must make space for a few quarts of second-stage fermented hot peppers.  If I cull a few jars of mustard, there just might be enough room.  Next, I will need to make room in the cupboard for at least 12 quarts of tomatoes, a few jam jars of tomato paste, and many pints of various pickles.  I manage it every year, but it’s always a battle, as our storage space is limited.   What other tasks await?  Well, there are gloves to stockpile (please see note above), and new jar lids to purchase.  There are recipes to flag and fermenting crocks to scrub.  All that will happen in the background over the next four or five weeks, as I shan’t start preserving until late August at the earliest.  In the meantime, I’ll start beavering away at my towering pile of mending and sewing projects, fueled by the Mister’s delicious treats and the start of yummy summer produce.  Life is very good at the Houseproud homestead, I’m happy to report.  And with that, I’ll sign off.  Until next week, my pets!  Fondly – yr little munakins 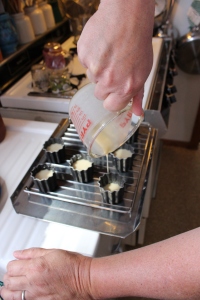 The Mister making Canneles de Bordeaux.  He’s quite the good baker, you know.